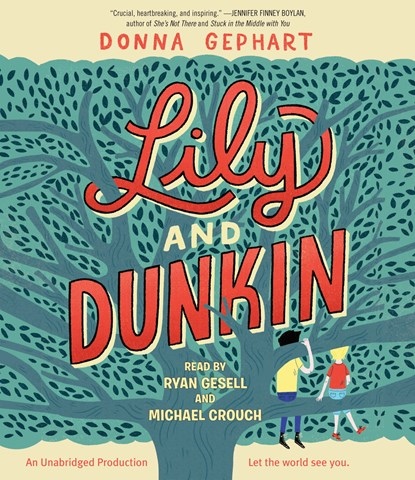 Narrator Michael Crouch portrays 13-year-old Tim, who tells his own story in the first person. When he's alone, he whirls happily in a flowered dress--"practicing to be me." Then his moods shift as he envies his sister, who CAN be herself; becomes angry at his anxious father, who worries he'll be found out; and feels warmly toward his mother, who is able to acknowledge him as "Lily." In alternate chapters, Ryan Gesell portrays Dunkin, who is new to the neighborhood. Dunkin feels uncomfortable with everything--with his friendlessness, his size, his diagnosis of bipolar disorder, his family's move to Florida, his kissing up to the "Neanderthal" basketball players, and his discounting of Tim. That's before he goes off his meds. As his emotions build, his words speed up. The dual narration helps the featured characters and their relationship sound more authentic and gives dimension to secondary characters. S.W. © AudioFile 2016, Portland, Maine [Published: APRIL 2016]