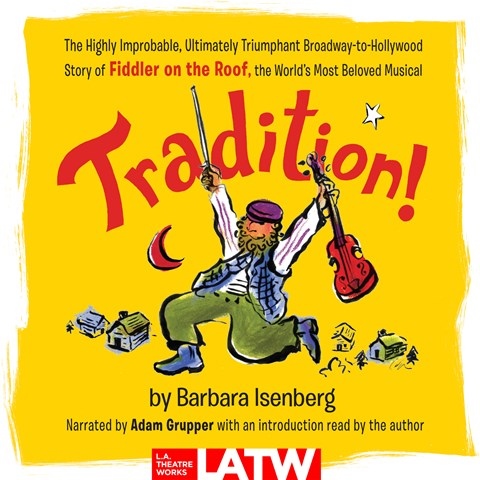 TRADITION! The Highly Improbable, Ultimately Triumphant Broadway-to-Hollywood Story of Fiddler on the Roof, the World's Most Beloved Musical

L.A. Theatre Works brings the making of FIDDLER ON THE ROOF to life (pun intended) in commemoration of the musical's 50th anniversary. Adam Grupper narrates seamlessly and steadily. The story starts with the germ of an idea planted in author Sholem Aleichem's stories about Tevya and his children and continues with anecdotes of the musical's first touring performances, its opening on Broadway in September 1964, the musical movie, and numerous recordings. Grupper delivers the narrative straightforwardly and gives the quotations appropriate accents. Although this is the story of one of the most popular musicals of all time, there are no musical clips. That's okay because listeners will be humming "Matchmaker, Matchmaker," "Tradition," "To Life," and many of the other familiar tunes in their heads when Grupper describes the songs and scenes. M.B.K. © AudioFile 2016, Portland, Maine [Published: JUNE 2016]