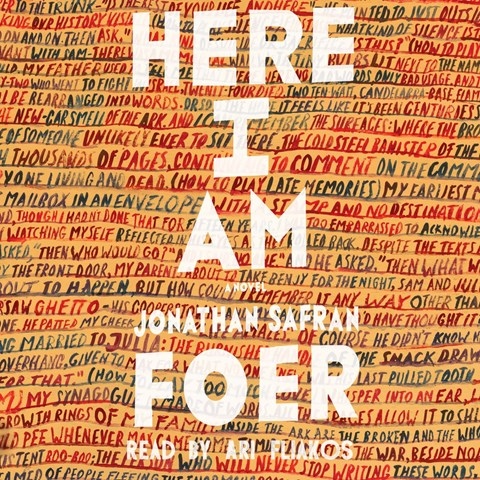 Audie winner Ari Fliakos's task in narrating Foer's sprawling novel is to capture the distinct intonations of four generations of Jacob Bloch's family. His approach is to quietly interpret their interior monologues and to dramatize their rapid-fire dialogues. He renders whole this self-referential and self-absorbed, as well as quick-witted and hyper-aware, Jewish-American family, while illuminating numerous excursions into Jewish history and lore. Fliakos enlivens this passel of neurotics. The audiobook traces the Bloch family's stories of varied crises: An Armageddon-like earthquake threatens Israel's existence, Jacob and Julia Bloch's marriage dissolves, and Jacob's aged Holocaust-survivor grandfather commits suicide. Fliakos masterfully weaves the multiple perspectives (and many accents, including Israeli and Iranian) of this fragmented work into a cohesive and powerful audiobook. A.D.M. © AudioFile 2016, Portland, Maine [Published: OCTOBER 2016]