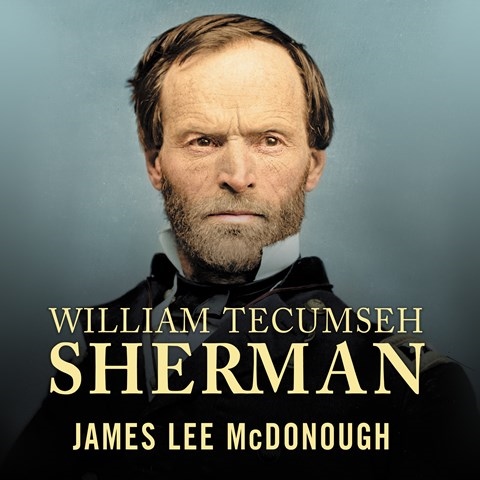 WILLIAM TECUMSEH SHERMAN In the Service of My Country: A Life

McDonough's detailed biography of the iconic American general is given a splendid narration by David Drummond. A complex, brilliant man, Sherman was an energetic and innovative campaigner whose upbringing in the West influenced his perspective on how to wage war. Seeing that one can defeat an enemy by taking away its ability to wage war, Sherman was able to defeat his opponents with fewer casualties than his friend Ulysses S. Grant. Sherman's complex, strained relationship with his wife and aspects of his prewar and postwar life and career are all told in great detail. Drummond's sonorous baritone is a good match of text and voice. His narration is seemingly effortless as he delivers this long work at a consistent pace and with clarity throughout. M.T.F. © AudioFile 2016, Portland, Maine [Published: OCTOBER 2016]