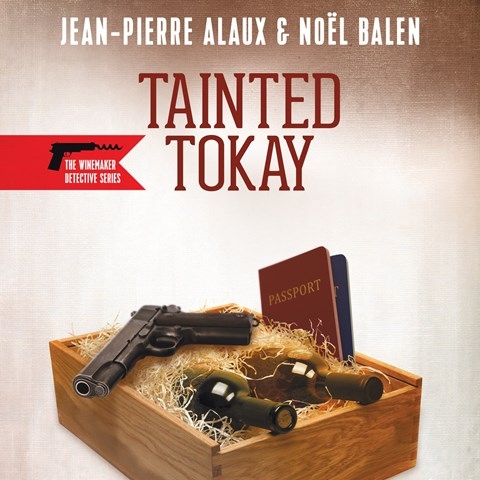 Narrator Simon Prebble's voice brings out all the flavors of this tale about fine spirits and schemes. Prebble's diverse accents create a credible European setting for the mystery that develops when wine consultant Benjamin Cooker and wife, Elisabeth, fall victim to shady tour guides while on a holiday in Hungary to, among other things, taste the wines of Tokay. A secondary mystery, gently intensified by Prebble's restrained narration, develops back in Bordeaux, where Cooker's lab director, Alexandrine, is violently mugged. When she evades questions about the incident, she's accused of protecting her attacker. The relationships between the characters are effectively conveyed by Prebble's modulated tones. Cooker's rough and self-assured voice, for example, becomes softer when he converses with Elisabeth. The straightforward delivery style established by Prebble's British accent and clear articulation, along with the story's dark elements, lends a noir feel to this quietly enticing mystery. M.F. © AudioFile 2017, Portland, Maine [Published: FEBRUARY 2017]