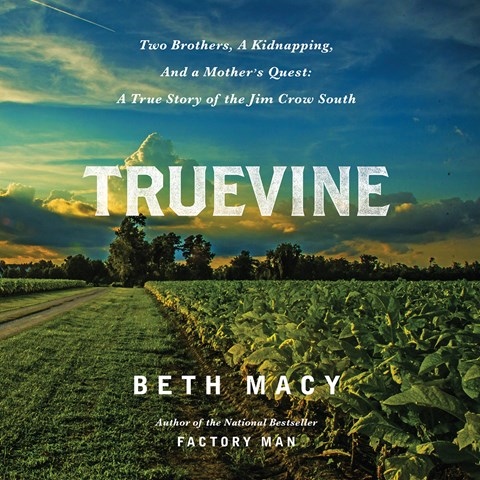 TRUEVINE Two Brothers, a Kidnapping, and a Mother's Quest; A True Story of the Jim Crow South

Narrator Suzanne Toren brings an understated and lucid voice to this strange but true story of the Jim Crow South. In 1899, brothers George and Willie Muse lived and worked with their sharecropping family on a tobacco farm in Truevine, Virginia. At ages 6 and 9 the brothers—both African-American albinos with golden hair—were kidnapped by circus agents and displayed as “freaks” for the next 13 years. As George and Willie traveled worldwide with the Ringling Brothers and Barnum & Bailey circuses, their mother tirelessly worked to bring them home. Toren’s poised, sophisticated narration makes for enjoyable listening while still allowing author Beth Macy’s impressive journalistic efforts to take center stage. A.T.N. © AudioFile 2016, Portland, Maine [Published: DECEMBER 2016]