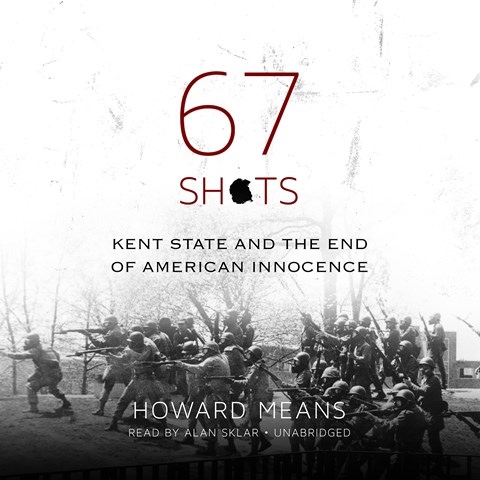 67 SHOTS Kent State and the End of American Innocence

Narrator Alan Sklar uses his deep voice to lend gravitas to an emotional story. It's been 46 years since the tragedy that left four students dead and a nation shaken during the depths of the Vietnam War. This audiobook uses the newly available Kent State oral history collection to examine the decisions that led to one of the most notorious actions of the 1960s era. It also provides a warning for us in our anxiety-ridden age to be vigilant and to think before we act on the public stage. Sklar reads at a steady pace and enunciates every word. He also builds tension as the story reaches its climax, pulling listeners along even even though they may already know the outcome. R.I.G. © AudioFile 2016, Portland, Maine [Published: NOVEMBER 2016]