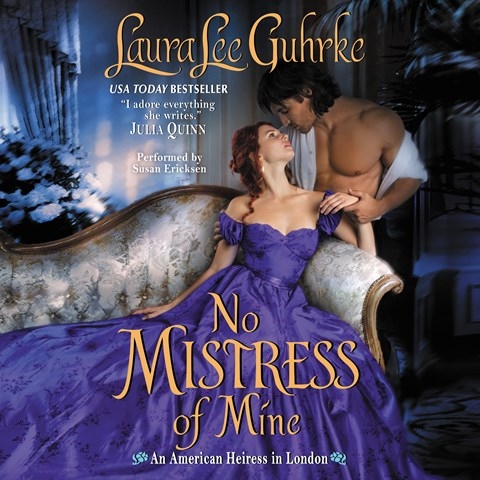 NO MISTRESS OF MINE American Heiress in London, Book 4

Narrator Susan Ericksen brings to life this historical romance, set in England in the late 1800s. Lord Denys Somerton's past has returned in the form of his former mistress, Lola Valentine. Lola, an American actress, has inherited half-interest in a theater with Lord Denys. Ericksen masterfully alternates between the main characters' English and American accents. Ericksen ensures that the listener becomes invested in Lord Denys and Lola's love story. Especially enjoyable is the banter between Denys and his friends as he seeks advice on how to deal with Lola's return. Even though this title is part of a series, it can be heard as a stand-alone with full enjoyment. S.B. © AudioFile 2016, Portland, Maine [Published: OCTOBER 2016]