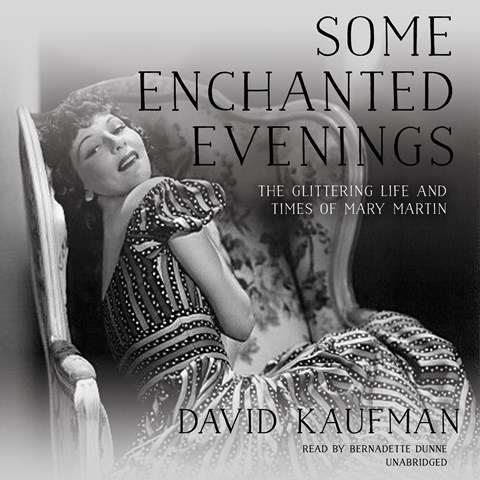 SOME ENCHANTED EVENINGS The Glittering Life and Times of Mary Martin

This somewhat plodding biography uses detailed anecdotes to flesh out actress Mary Martin's enigmatic and capricious personality. Bernadette Dunne's narration is soft, understated, and controlled. Both Martin's marriages are examined at some length. Her marriage to the crass Ben Hagman produced son Larry Hagman, who played television's J.R. Ewing on "Dallas". Insights are provided for Martin's lack of great success in films and her very great success in both Cole Porter and Rodgers and Hammerstein Broadway vehicles. Her roles in the Broadway and television versions of the musical PETER PAN are mined for many behind-the-scenes insights. Dunne's narration reflects an entirely different period and style in American musical theater. Those who remember that time will enjoy returning; students of that era will be enlightened. W.A.G. © AudioFile 2016, Portland, Maine [Published: NOVEMBER 2016]