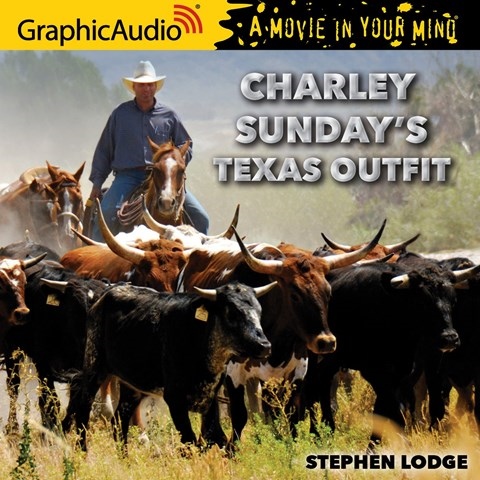 by Stephen Lodge | Read by Ken Jackson and a Full Cast

Gruff-voiced Ken Jackson narrates the adventures of Charles Abner Sunday and his Texas Outfit as they carry out a modern-day longhorn cattle drive from Colorado to Texas. The story is told by Charley's grandson, Henry-Ellis, to his grandchildren. Enlivened by a full cast and lots of sound effects, including lowing cattle, hoofbeats, and rain, these aging cowboys encounter trains, bandits, rattlers, and even Indians. Bob Payne uses a range-toughened voice to portray Charley's gumption. Matthew McGee's high-pitched voice brings grandson Henry-Ellis to life as he recalls his experiences as a 10-year-old cowboy. Karen Novak as Kelly King, the newspaper reporter, adopts a crisp voice when reading her columns. There's a little romance, a lot of action, and some serious yarn-spinning in this Western. M.B.K. © AudioFile 2018, Portland, Maine [Published: APRIL 2018]