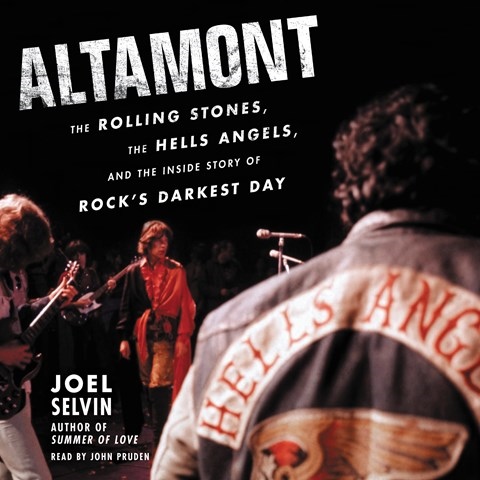 ALTAMONT The Rolling Stones, the Hells Angels, and the Inside Story of Rock's Darkest Day

Narrator John Pruden's resonant narration lacks the pathos that usually accompanies such uproarious fare as this audiobook. The Altamont Free Concert, which took place near San Francisco in December 1969, was the West Coast's response to Woodstock, which had taken place in August of that year. Altmont unfurled at the end of the Rolling Stones' legendary tour, when the band was at the height of its powers. It would forever solidify the band's reputation as rock's reigning bad boys, especially after a member of the Hell's Angels stabbed a fan to death in front of the stage while the Stones played--an incident famously captured on film in the ensuing documentary, GIMME SHELTER. As Selvin investigates all the mind-boggling details of what went wrong, Pruden's level tone results in a smooth and engaging performance. J.S.H. © AudioFile 2016, Portland, Maine [Published: OCTOBER 2016]