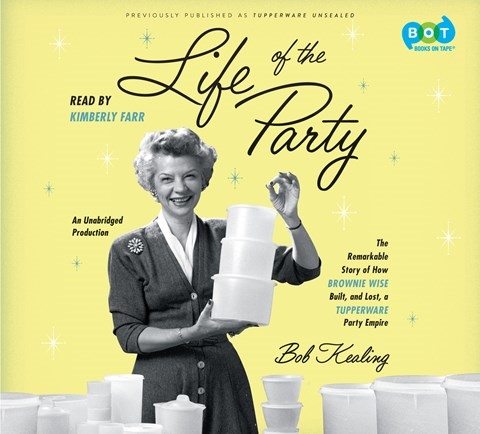 LIFE OF THE PARTY The Remarkable Story of How Brownie Wise Built, and Lost, a Tupperware Party Empire

Narrator Kimberly Farr performs this chronicle of pioneering female executive Brownie Wise's rise to national prominence while running Tupperware's sales division in the 1950s. Farr emphasizes Wise's ambition and can-do attitude as the divorced mother works her way from the secretarial pool to management, rebranding herself a widow and model Tupperware sales rep. Farr's winning characterization of Wise adds meaning even to some of the driest details of running a business--from production problems to distribution delays--and she capitalizes on moments of drama, particularly the tumultuous relationship between Wise and Tupperware creator Earl Tupper, which ultimately ended in Wise's being fired. An interesting piece of history and a portrait of a trailblazing woman. A.F. © AudioFile 2016, Portland, Maine [Published: AUGUST 2016]