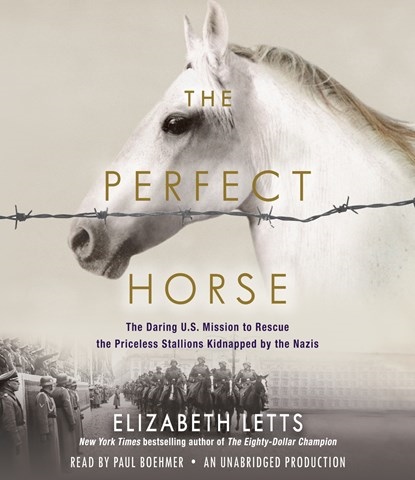 THE PERFECT HORSE The Daring U.S. Mission to Rescue the Priceless Stallions Kidnapped by the Nazis

The American rescue of the famous Lipizzaner stallions and rare Arabian horses from the advancing Russians at the end of WWII is a behind-enemy-lines race against time. The Germans valued the famous horses, but the Russians would likely have slaughtered them. Paul Boehmer's narration is melodic and deliberate as he outlines the background of the Nazi eugenics program as applied to horse breeding and the personnel who rode and trained the horses. Boehmer's facility with Eastern European names and places is apparent. In tune with Letts's prose, Boehmer ramps-up the drama for the flight of the horses out of war-torn Vienna and Hostau, Czechoslovakia, the nighttime ride by the son of a U.S. senator to negotiate the animals' safety, and the passage of the "orphan horses" across the ocean to the United States. A.B. © AudioFile 2016, Portland, Maine [Published: AUGUST 2016]