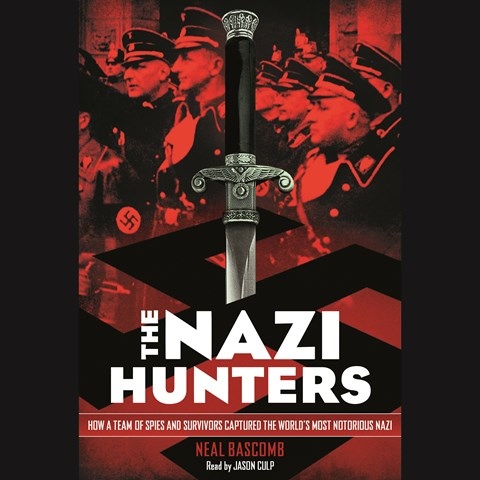 Adolf Eichmann was responsible for creating the logistics for Nazi Germany's "Final Solution," the annihilation of the Jewish people. With ruthless efficiency, he organized the roundup, degradation, and transportation of millions of Jews from their homes to the death camps. Jason Culp reads this well-researched account of the sixteen-year ordeal to find Eichmann and bring him to justice. The efforts of Holocaust survivors, volunteers, spies, and the fledgling Mossad of Israel combine in this true-life global thriller. Culp reads with precision, directness, and focus--echoing the efforts of the Nazi hunters in pursuit of their mission. He makes the complicated story easy to follow with accented character voices and conveys a palpable sense of the fear and tension endured in dangerous and fraught circumstances. L.T. Winner of AudioFile Earphones Award © AudioFile 2016, Portland, Maine [Published: AUGUST 2016]