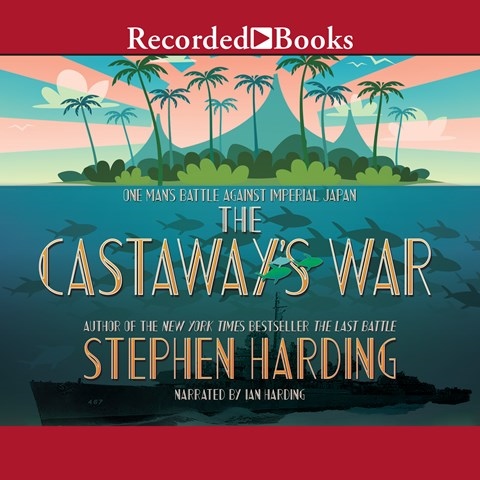 THE CASTAWAY'S WAR One Man's Battle Against Imperial Japan

Narrator Ian Harding splendidly delivers this account of U.S. Navy Lieutenant Hugh Barr Miller's amazing act of heroism and survival in WWII. The evening of July 5, 1943, Miller's ship was sunk, and, after three days at sea, he and several shipmates landed on Japanese-occupied Arundel Island. Injured and believing he was going to die, Miller persuaded his comrades to leave him to his fate. Miraculously, he recovered and began a one-man war against the Japanese. After his rescue, he became a media darling. Harding's baritone voice does well in delivering this work. His staccato pacing sometimes starts to get away from him, but he reels the pace in. His inflection is good, and his enunciation, very good. Although no unique voices are used for dialogue, these portions are distinguishable from the narrative. Harding's overall performance is well done, making this production an enjoyable listening experience. M.T.F. © AudioFile 2016, Portland, Maine [Published: NOVEMBER 2016]