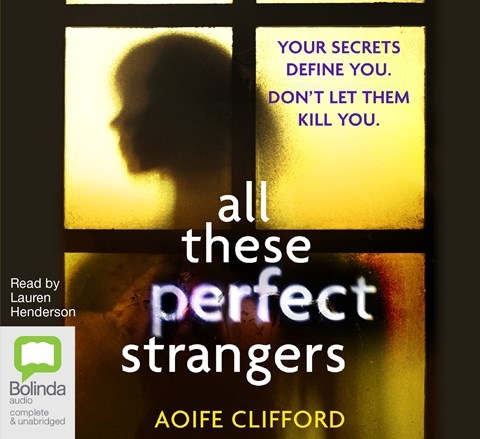 ALL THESE PERFECT STRANGERS

Narrator Lauren Henderson is outstanding as she portrays the deeply troubled keeper of secrets, Penelope Sheppard, who gratefully leaves a mysterious and turbulent past to attend (on scholarship) Scullin University, where she's telling her story to a school psychiatrist. Henderson skillfully captures each accent and eccentric personality in this novel, set in 1990s Australia. Soon after Sheppard arrives at Scullin, women begin to die. Is it by accident or murder? Gay Asian-Australian Toby, everybody's friend, whose wit and warmth hide his sharp observational skills, is Henderson's best creation. Because the complicated story shifts time and point of view frequently and often quite unexpectedly, audio is the perfect format. Since most of the characters are disturbed and unreliable, the conclusion--and even the beginning--are left to listener interpretation. S.G.B. © AudioFile 2016, Portland, Maine [Published: SEPTEMBER 2016]