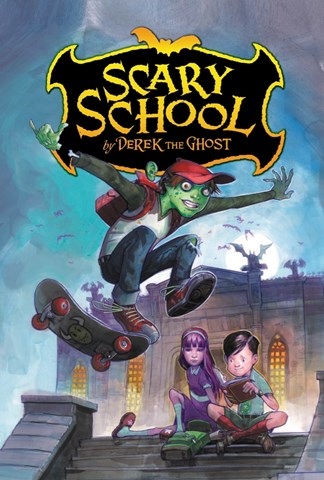 This fun audiobook kicks off a series playfully written and narrated by "Derek the Ghost" (a.k.a. author Derek Taylor Kent). Scary School is run by monsters, and its students are both humans and monsters. Derek the Ghost, who is listed as narrator, is a deceased 11-year-old former pupil. Each chapter is buoyantly presented by school personnel, such as Principal Headcrusher and Nurse Hairymoles, and by pupils Charles Nukid and Petunia. Narrator Kent perfectly re-creates accents that reflect the monsters' countries of origin, verbally produces his own sound effects, and delivers wordplay to perfection. Listeners will share the excitement as the school prepares for the Ghoul Games. Usually, the games’ winners eat the losers—but this time there's a Ghoul Games Miracle. A winning conclusion and a "secret" chapter introducing Book 2 add to the fun. S.G.B. Winner of AudioFile Earphones Award © AudioFile 2016, Portland, Maine [Published: AUGUST 2016]