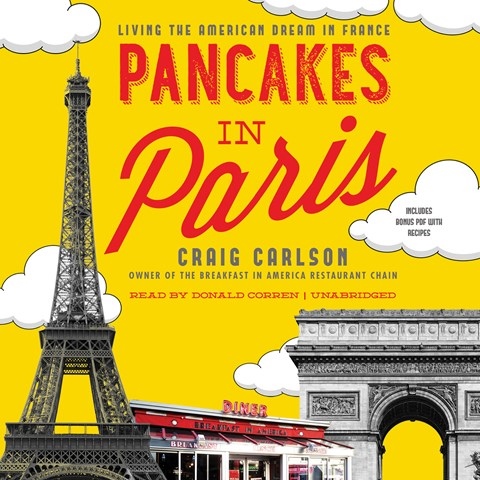 PANCAKES IN PARIS Living the American Dream in France

In this heartwarming memoir, Donald Corren's engaging performance highlights Carlson's roller-coaster experience of getting Breakfast In America, a diner in Paris, from concept to actuality. Corren's spirited narration captures Carlson's struggle not only with French bureaucracy and other cultural differences but also with creating a following for the diner. While most of the accents and pronunciations are spot-on and capture the nuances of the French people in the book, some deliberately imperfect pronunciations add an authentic flavor of an American trying to fit in. Ever entertaining are Corren's perfectly delivered comments on the sometimes passionate, sometimes laissez-faire Gallic responses to the various situations that make Carlson's journey both difficult and rewarding. M.F. © AudioFile 2016, Portland, Maine [Published: SEPTEMBER 2016]