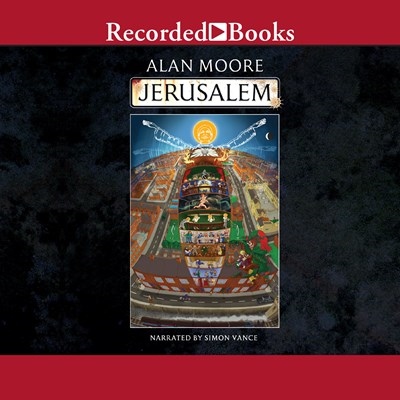 Alan Moore’s vivid imagistic prose, which touches all the listener’s senses, has the perfect partner in Simon Vance, who delivers this epic mellifluously. From the opening scene, one’s awareness of the sheer length ahead falls away because each moment absorbs one’s attention. Many characters’ viewpoints emerge as the narrative recounts the past 200 years of impoverishment in Northampton, England. Vance treats each person’s story and language—some of a time and status that visual readers might be hard pressed to re-create—with respect and enough humor to keep it all from becoming a deluge. Here’s a monument to a place, a people, a writer whom too many have dismissed as “a mere graphic novelist,” and a narrator who provides the author's text with all it deserves. F.M.R.G. Winner of AudioFile Earphones Award, 2017 Audies Winner © AudioFile 2016, Portland, Maine [Published: NOVEMBER 2016]