Home»Reviews»WE ARE NOT SUCH THINGS 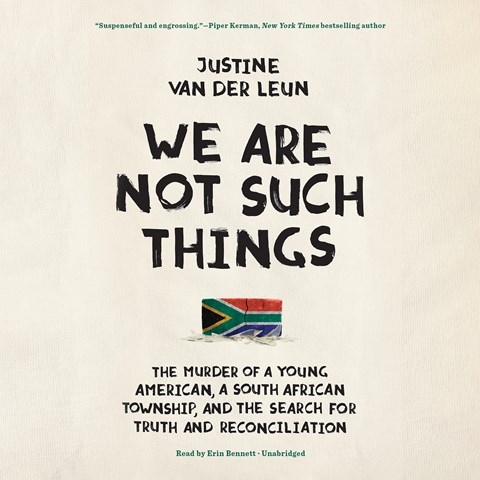 WE ARE NOT SUCH THINGS The Murder of a Young American, a South African Township, and the Search for Truth and Reconciliation

Narrator Erin Bennett delivers Justine van der Leun’s research on a vicious killing and its connection to the racial fracture between blacks and whites in Colonial South Africa. The restrictive policy of whites toward blacks eventually became the government-supported system of Apartheid. Bennett’s intelligent delivery keeps the history lesson engaging and the crime as shocking as ever. In 1993, a group of black men attended an anti-Apartheid meeting and were roused to violence. Amy Biehl, a young, white American scholar, who, ironically, was an African National Congress activist, was brutally murdered by the mob. Twenty years later, van der Leun interviewed many of those involved with the case. Bennett’s extraordinary narration captures her revelations of oppression, racial inequality, and gender-based violence, taking listeners deep into the heart of a complex nation. S.J.H. Winner of AudioFile Earphones Award © AudioFile 2016, Portland, Maine [Published: SEPTEMBER 2016]