Home»Reviews»WHILE THE DUKE WAS SLEEPING 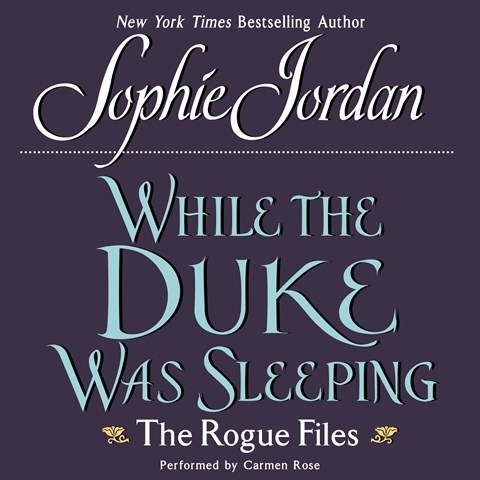 WHILE THE DUKE WAS SLEEPING The Rogue Files, Book 1

Narrator Carmen Rose captures heroine Poppy Fairchurch’s vulnerability and hero Struan Mackenzie’s no-nonsense temperament and virility in this historical romance. After Poppy saves the Duke of Autenberry from being killed by a runaway carriage, he slips into a coma. When she’s mistakenly believed to be his fiancée, his friend demands that she keep up the farce for the good of the family. But the duke’s half-brother, Struan Mackenzie, thinks the engagement is a lie and wants Poppy for himself. Rose moves smoothly from character to character—from Poppy’s petulant younger sister to Struan’s upper-class stepmother—giving dimension to all the supporting characters. In Rose’s capable voice, the story, set in London and at the duke’s country home at Christmastime, is a satisfying romp. S.H. Winner of AudioFile Earphones Award © AudioFile 2016, Portland, Maine [Published: NOVEMBER 2016]