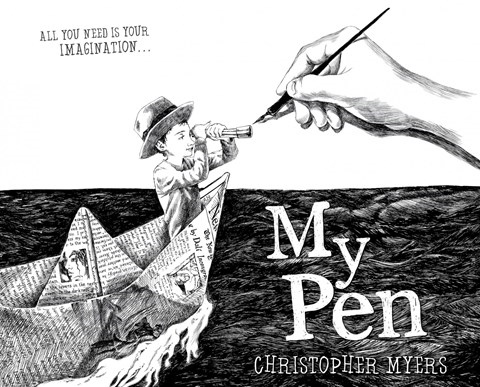 Author, illustrator, and narrator Christopher Myers celebrates the power of his pen, the pen that has won him Caldecott Honor and Coretta Scott King Honor Awards. In a gentle but firm voice fueled by his imagination, Myers creates thought-provoking scenes with his pen--from an elephant in a teacup to worries about the wars around the world. This is a pen that creates in the margins-- "All you need is your imagination"--and encourages creators everywhere to follow suit. Woven into the narration and musical score are vignettes delivered by Dion Graham, which, interestingly, if one listens carefully, give voice to the animals in the margins and kudos to Myers's mother, who taught Christopher to draw. The companion illustrated text is essential. A.R. © AudioFile 2017, Portland, Maine [Published: JANUARY 2017]