Home»Reviews»LOCK AND KEY: THE GADWALL INCIDENT 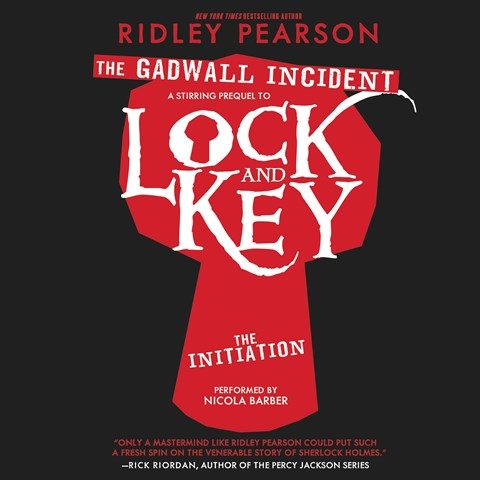 LOCK AND KEY: THE GADWALL INCIDENT Lock and Key, Book 2

This audiobook is a prequel to the Lock and Key series, a contemporary revision of the Sherlock Holmes canon. Nicola Barber narrates this origin story, featuring a teenaged version of James Moriarty, as told by his younger sister, Moira. Barber sounds older than 12-year-old Moira; however, the prequel is a retrospective. Moira reflects back on the siblings' risky adventure--investigating an incident involving their father, a mysterious stranger, and a rendezvous at Gadwall--which she believes shaped her brother's future as the devious and brilliant nemesis of Sherlock Holmes. Barber perfectly affects the refined speech the listener would expect of James and Moria's wealth and station. The hint of her English accent suits the Moriarty siblings' patrician Boston upbringing. Expect adventure, intrigue, and a cliff-hanger ending. L.T. © AudioFile 2016, Portland, Maine [Published: NOVEMBER 2016]