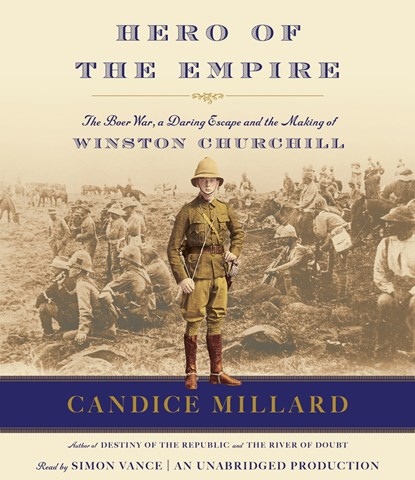 HERO OF THE EMPIRE The Boer War, a Daring Escape, and the Making of Winston Churchill

Simon Vance's full-throttle narration is one of the many delights in this rousing biography of Winston Churchill's youthful escapades in the Boer War. Yes, the future statesman WAS a colossal egoist blessed with complete self-confidence, but, trust me, he was also funny, smart, talented, brave, good-hearted, and an all-together boon companion. He's also lucky in Vance, who reads the future statesman's boastful letters home with a straight face, which allows the audience to laugh, and with just the right hint of the Churchillian timbre. His interpretations of others, including Boer soldiers, Brits of all classes, and the odd American are equally well shaded. And when the adventure breaks out, as it often does, he breathlessly dodges bullets with the best of them. A.C.S. Winner of AudioFile Earphones Award © AudioFile 2016, Portland, Maine [Published: OCTOBER 2016]