Home»Reviews»THE BEST BEAR IN ALL THE WORLD 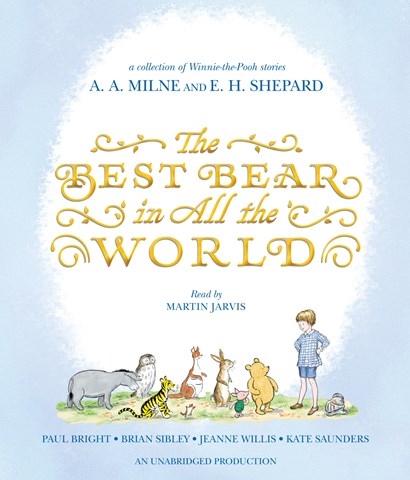 THE BEST BEAR IN ALL THE WORLD

Martin Jarvis takes on the narration of four new Winnie-the-Pooh stories and nails it. In this authorized sequel Jarvis has all the emphasis, hesitation, skepticism, authority, bluster, elongated pauses, grumpiness, breathlessness, hush, and tempo and voice modulation listeners expect from a Winnie-the-Pooh 90th anniversary celebration. Listeners will meet Penguin, who arrives in the Hundred Acre Wood, take an adventure to find the sauce--or is it the source?--of the Nile, help Eeyore protect his clover patch, and search for a dragon. Jarvis's delight is clear as he delivers the dramatic moments involving Christopher Robin, Pooh, Piglet, and Eeyore, who is portrayed in Jarvis's deepest and most gravelly voice. To complete the production, the four authors share their individual inspirations for each adventure. A.R. Winner of AudioFile Earphones Award © AudioFile 2017, Portland, Maine [Published: JANUARY 2017]