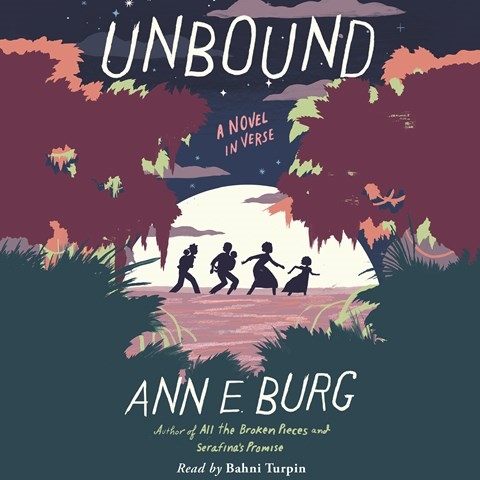 UNBOUND A Novel in Verse

Narrator Bahni Turpin embraces the emotions of 9-year-old Grace while delivering the cadences of Burg's novel in verse. Grace's mother tries to prepare her daughter for working in the Big House, cautioning her to keep her eyes down and her mouth shut. But how can Grace's mother truly ready her blue-eyed, light-skinned daughter for the hateful Missus? In depicting Grace's encounters with the cold-hearted Missus, Turpin captures the child's visceral fear. When the Missus decides to sell Grace's family, Grace remembers what she heard growing up--"You hear 'auction,' 'n' you run!" As the family flees to the Great Dismal Swamp, Turpin dramatically portrays how Grace counters heartbreak with heroism and shame with a spirited sense of self. S.W. © AudioFile 2016, Portland, Maine [Published: DECEMBER 2016]