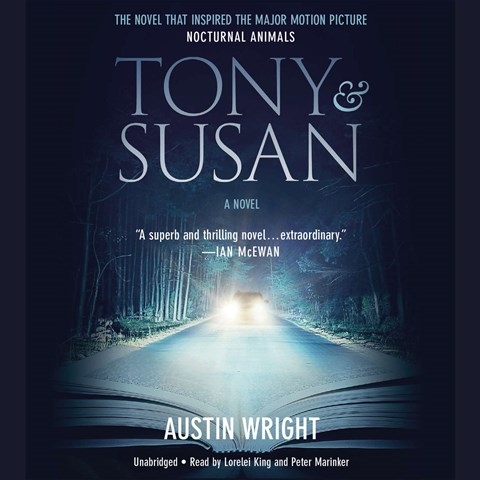 Narrators Lorelei King and Peter Marinker deliver compelling performances of this story-within-a-story. Out of the blue, Susan Morrow's ex-husband wants her opinion of a novel he's written. In the book, the fictional Tony Hastings is on a road trip to Maine with his family. As Susan reads the manuscript--and Lorelei King reads it to listeners--it turns out to be a thriller, one that brings growing disquietude to Susan. King's methodical delivery in portraying Susan serves as a sharp contrast to the syncopated, multiple rhythms Marinker adopts to capture the personalities of the characters in the ex-husband's novel. His narration moves from a teenager's brazen frankness to a father's languid and measured words and the raspy tones of savage malcontents. As the story progresses, Marinker's delivery makes the ensuing violence palpable. In the end, listeners will find themselves wondering just how thin the line is between barbarism and humanity. E.B. © AudioFile 2017, Portland, Maine [Published: MARCH 2017]