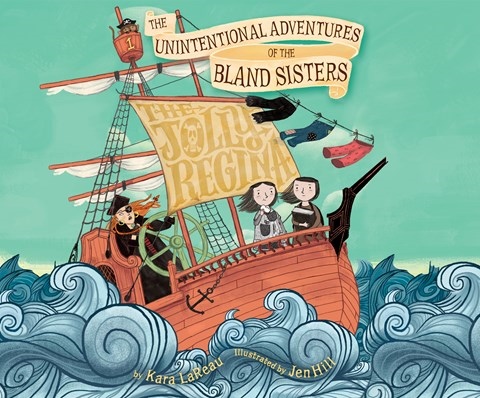 THE UNINTENTIONAL ADVENTURES OF THE BLAND SISTERS The Jolly Regina

Kara LaReau's new series is Lemony Snicket for the younger set--with humor as snarky and pun filled but not as dark. Rosalyn Landor employs a schoolmarmish-sounding voice as narrator, opening each chapter with the definition of a word that figures prominently in the chapter. The Bland sisters, Jaundice and Kale, who live on the edge of Dullsville, sound as bland as their routine, uneventful lives. But when they're kidnapped by a crew of female pirates, the fun and the laughs begin. Each pirate's unique voice adds to the atmosphere. Fatima, the cook, is especially well developed as she displays emotions ranging from meanness to hurt feelings to friendliness--with a fine singing voice to boot! Arghh, matey, 'tis real treasure. N.E.M. Winner of AudioFile Earphones Award © AudioFile 2017, Portland, Maine [Published: MARCH 2017]