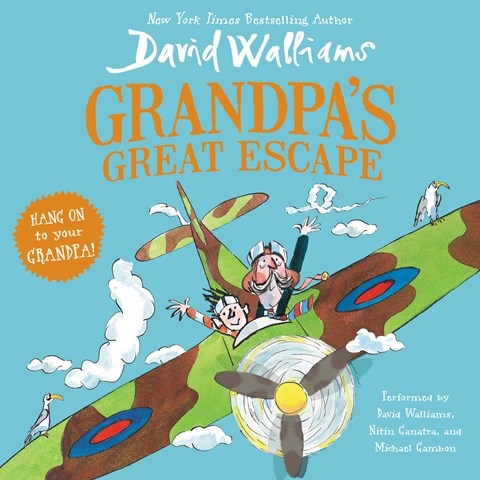 Narrator David Walliams and cohorts Nitin Ganatra and Michael Gambon are captivating as they bring all the characters in this audiobook to life. The narrating trio chattily provides the background and details of the book's main characters. Twelve-year-old Jack is devoted to his grandfather, a WWII pilot. Jack's parents agonize about keeping Grandfather safe at home. And the vicar crafts his own plan to keep Grandpa safe. The story takes off when Walliams, Ganatra, and Gambon slip into the character voices of a caring grandson; his exasperated mother; a bargain-hunting shopkeeper; a melodramatic vicar and his henchmen; and ever-optimistic Grandpa, with his spot-on RAF voice. Listeners will travel the skies over Britain with Wing Commander Arthur Bunting and his adoring grandson. A.R. © AudioFile 2017, Portland, Maine [Published: JULY 2017]