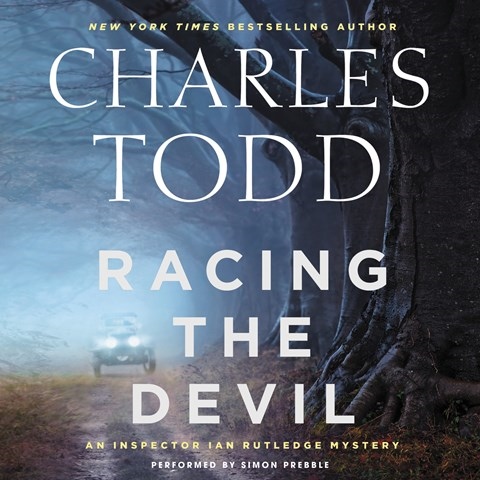 Narrator Simon Prebble slips comfortably into Inspector Ian Rutledge's persona in the 19th installment in the series. Having survived the French battlefields of WWI and a disastrous automobile race in 1919, Rutledge investigates a car crash in the South Downs. Was the man who caused the crash in Nice the same man responsible for the fatal accident in the Downs? Hamish, Rutledge's ghostly assistant, who is portrayed with a light Scottish brogue, helps the inspector track down the culprit. The close-knit members of the small town in South Downs are portrayed in a variety of soft-toned accents, with each character subtly differentiated. Prebble torques up the tension as Rutledge and Hamish follow elusive clues, determined to solve this convoluted mystery despite the rain and reluctant villagers. M.B.K. © AudioFile 2017, Portland, Maine [Published: FEBRUARY 2017]