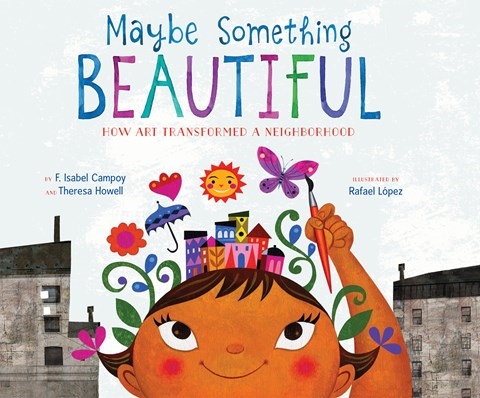 MAYBE SOMETHING BEAUTIFUL How Art Transformed a Neighborhood

Narrator Adriana Sananes delights in the imagination and hope of young Mira. A doodler, drawer, and painter, Mira shares her creations--an apple, a songbird, a heart--with the people she meets along the street. After she tapes a yellow sun to a drab brick wall and a man with paintbrushes and a vision for "something beautiful" discovers it, a neighborhood transformation begins. Sananes's enthusiasm is evident; Mira's outbursts of joy, the paintbrush man's musings on the wall's possibilities, and even a policeman come through as vivid characters. Accompanying music provides bursts of merengue, cha-cha, and salsa as neighbors come together to paint. An interview with the authors in which they explain the origins of the Urban Art Trail in the East Village of San Diego concludes the production. A.R. © AudioFile 2017, Portland, Maine [Published: FEBRUARY 2017]