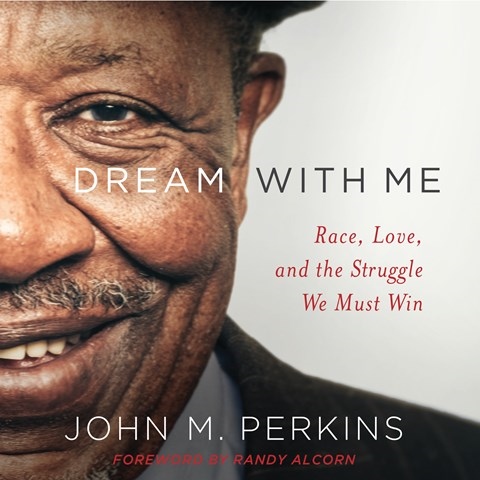 DREAM WITH ME Race, Love, and the Struggle We Must Win

Eighty-six-year-old Mississippi sharecropper's son John Perkins has seen it all, and narrator Calvin Robinson's powerful yet graceful voice tells his story with gentle wit. Robinson deftly delivers Perkins's descriptions of promoting voters' rights and school desegregation during the Civil Rights movement despite being imprisoned and abused. Listeners will enjoy Perkins's account of finding his faith when his son, Spencer, invited him to Sunday school--to win a prize! It's informative to hear Perkins share his musings, question whether he should have used his own children in the fight for school desegregation, criticize the failure of some churches to do more, and lament the breakdown of black families. Robinson strikes an optimistic note when Perkins dreams of a future in which everyone shows love and forgiveness while also reminding us to learn from history. S.G.B. © AudioFile 2017, Portland, Maine [Published: JUNE 2017]