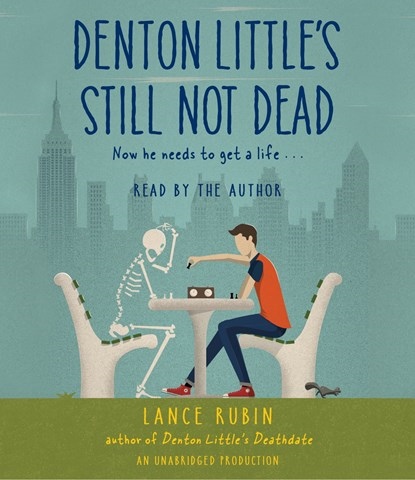 Denton Little survived his "deathdate." Now what? Author/narrator Lance Rubin is a believable teen Denton, alternately snarky and clueless as he discovers that he is not alone in his situation and that much of what he has grown up believing has been a lie. His friend Millie is given a generic timbre but a humorously deadpan delivery. Best friend Paolo has just a trace of a Spanish accent--which seems odd, as his mother, who works for the Death Investigations Agency, does not. Also, especially early on in the audiobook, Rubin seems to have difficulty pronouncing the name "Paolo." Rubin's pace is fast, and at times the name comes out as something closer to "Pal." Fans of DENTON LITTLE'S DEATHDATE will enjoy reconnecting with these characters, but this sequel does not stand well alone as either a print book or an audiobook. C.M.A. © AudioFile 2017, Portland, Maine [Published: JULY 2017]