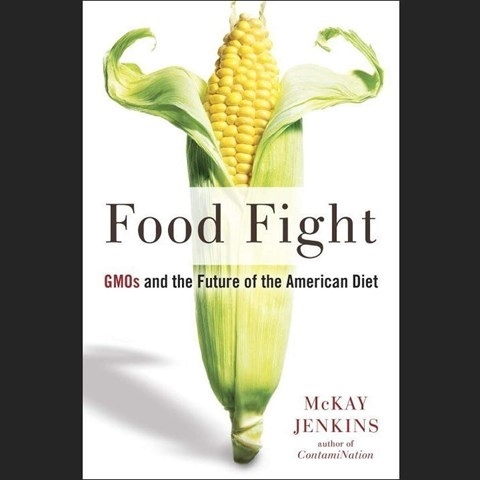 FOOD FIGHT GMOs and the Future of the American Diet

Narrator Robert Fass thoughtfully delivers this provocative exploration of the role of GMOs (genetically modified organisms) in our agriculture and diet. He navigates the complexities of genetic engineering with a straightforward delivery that makes accessible both the science and the stories associated with it. This audiobook explores a major issue of the 21st century, detailing how our seeds are owned, grown, sprayed, and marketed, and who benefits from the development of genetically modified plants and animals. Author McKay Jenkins has traveled widely. This audiobook reveals how corporate giants with limited government oversight have made our food system dependent on two genetically engineered crops--corn and soybeans--which are now present in almost all processed foods. It also highlights the successes and failures of modified plants worldwide. A.D.M. © AudioFile 2017, Portland, Maine [Published: APRIL 2017]