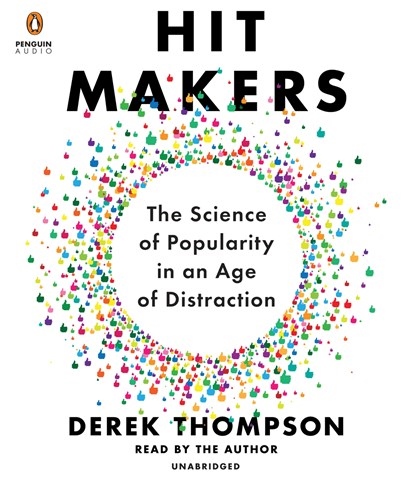 HIT MAKERS The Science of Popularity in an Age of Distraction

Does chaos theory explain the success of the rock-and-roll song "Rock Around the Clock"? Did Joseph Campbell and Flash Gordon influence the creation of Luke Skywalker? Why are our aspirational desires (I want to want watch more "Nova") so often in conflict with our actual choices (Let's watch "Real Housewives")? Derek Thompson, with his convincing, professional delivery, addresses these and other hit-making theories in music (the importance of repetition), publishing (the real story behind FIFTY SHADES OF GREY), movies (the science of scriptwriting), news (45% of the population gets its news from Facebook), and design (the formula used by America's greatest designer). Hint: Hits often result from successfully marketing a product that combines something familiar with something new. Thompson manages to keep the audiobook moving briskly and, along the way, debunks some myths such as "going viral" and overnight success. R.W.S. © AudioFile 2017, Portland, Maine [Published: MARCH 2017]