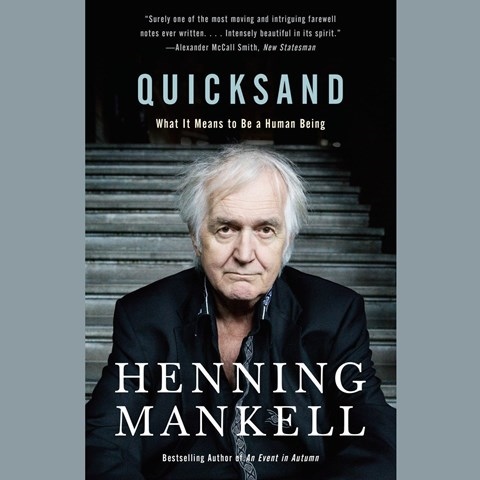 QUICKSAND What It Means to Be a Human Being

Sean Barrett's performance of these 67 essays written by Henning Mankell between his diagnosis with lung cancer and his death faithfully encapsulates the Swedish author's sense of seriousness and social justice. Mankell ranges across his life, letting us glimpse childhood memories, his satisfaction with running a theater in Mozambique, embarrassment at asking a teenager dying of AIDS if she was afraid of death, and grave concern about the storage of nuclear waste in Finland for 100,000 years. Barrett's voice and tone expertly incorporate a vague sense of being European and of language translation. His timing and rhythm are so perfect that we can hear the melancholy and joy that shape Mankell's reflections. Mankell fears being dead for a long time. We, at least, have the large body of work he left behind to enjoy. A.B. Winner of AudioFile Earphones Award © AudioFile 2017, Portland, Maine [Published: MARCH 2017]