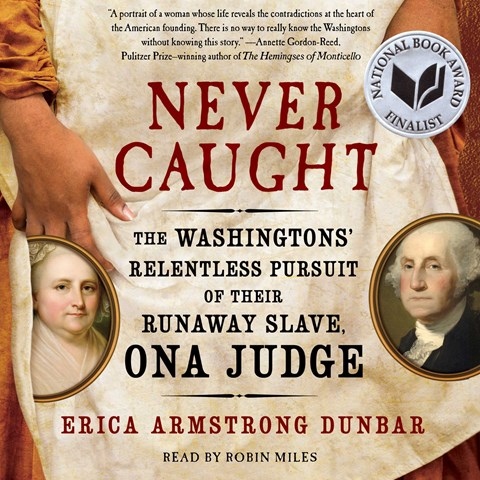 NEVER CAUGHT The Washingtons' Relentless Pursuit of Their Runaway Slave

Ona Judge was a mixed-race slave in the Mount Vernon household of George and Martha Washington until she escaped in 1796, three years before the president's death. Robin Miles gives voice to this remarkable woman, who was pursued by the Washingtons but eventually found freedom in New Hampshire. Miles's reading is straightforward and unadorned, mirroring Dunbar's journalistic tone, but it's never dry. Although the text includes few of Judge's own words, it contains a wealth of historical context and personal detail gleaned from interviews the fugitive gave to abolitionist newspapers near the end of her long life. In the hands of a skilled writer and a passionate narrator, this rich source material is crafted into an entertaining and important history. D.B. © AudioFile 2017, Portland, Maine [Published: OCTOBER 2017]