Home»Reviews»DEATH ON THE RIVER OF DOUBT 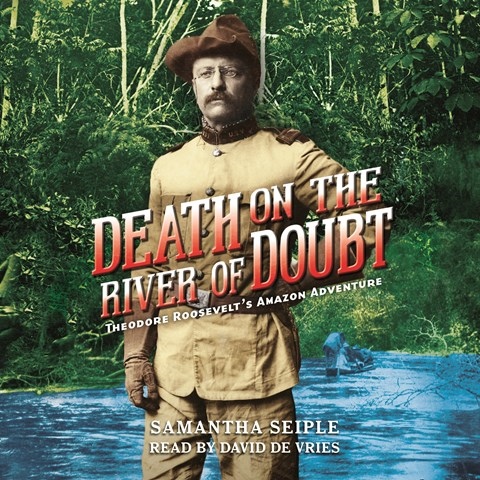 DEATH ON THE RIVER OF DOUBT Theodore Roosevelt's Amazon Adventure

Theodore Roosevelt was a war hero, a U.S. president, and a fearless outdoorsman. After his presidency, despite his advancing age, he accepted a dangerous mission to survey an uncharted Brazilian river with a team of Brazilian and American explorers and cartographers. An audiobook with limited dialogue and a lack of character voices requires both an exciting story and a skilled narration. Happily, the author provides the former, and narrator David de Vries, the latter. In their quest, Roosevelt's team members face disease, hunger, hostile locals, and death. While their story is a riveting account of exploration, de Vries reads with a certain amount of detachment, which befits the precise and unembellished tone of the men's journals that provided the source material. It's the story that provides the excitement here. L.T. © AudioFile 2017, Portland, Maine [Published: APRIL 2017]