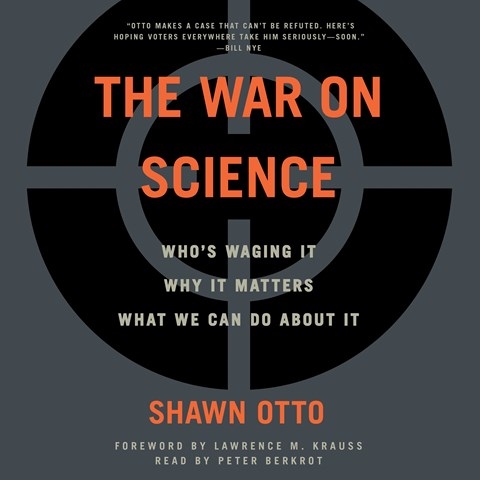 THE WAR ON SCIENCE Who's Waging It, Why It Matters, What We Can Do About It

Peter Berkrot narrates this audiobook with the urgency of a correspondent on the front lines. Sadly, the reporting from our schools, legislatures, and media shows that there's a war on science going on, and science is losing. The author explains how a belief in science, encouraged in the Constitution, and once a bulwark of the Republican Party, has in recent decades been flipped on its head. Some of this regression is due to identity politics--in which scientific positions are based on the interests of social groups--and to the "Me Culture"--which has led people to believe that subjective truths deserve equal time with objective truths. But greed and ideology are the biggest forces dragging down science. For those who want to enlist in the fight, Otto offers suggestions in the final chapters. R.W.S. © AudioFile 2017, Portland, Maine [Published: MARCH 2017]