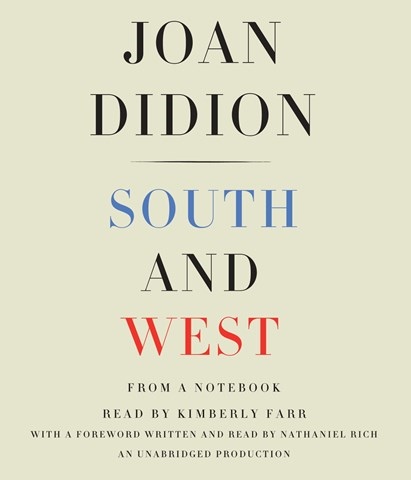 SOUTH AND WEST From a Notebook

Narrator Kimberly Farr dissolves the barrier between author and listener, creating an intimate atmosphere. Her unforced performance conveys Didion's unguarded reactions to life in the South, primarily in 1970. Farr enlivens Didion's recollections, highlighting the author's curiosity about the people she meets and the conversations she overhears as well as her uneasiness both in backwoods communities in rural Mississippi and at social gatherings in New Orleans' Garden District. When Didion reflects on her native California, Farr's tone lightens, underscoring the author's comfort at being in familiar territory. This collection of unedited notebook entries emphasizes the sociocultural differences between the Gulf Coast and the West Coast, most of which still ring true decades later. Essayist Nathaniel Rich reads his own foreword to the audiobook. C.B.L. © AudioFile 2017, Portland, Maine [Published: MAY 2017]