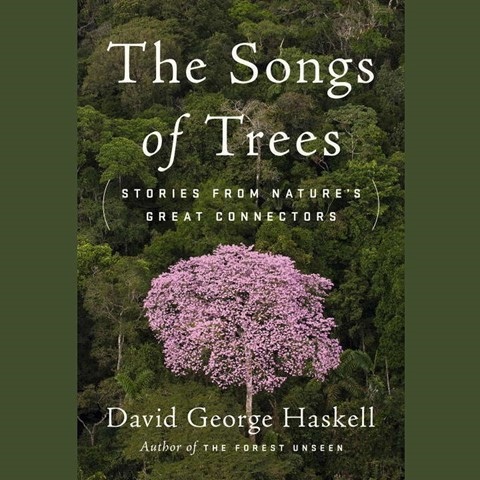 THE SONGS OF TREES Stories from Nature's Great Connectors

Trees have songs, says Haskell, and he wants to record them. Cassandra Campbell's narration is soothing and perhaps musical, a good match to Haskell's descriptive writing on the beauty of trees. He starts his global tour in the Amazonian forest of Ecuador, where he considers the environment of a sabo tree. He then discusses the spiders and monkeys that surround it, and the oil fields that threaten it. Campbell's voice stays soft but adds an edge when the subjects aren't so poetic, as when Haskell describes the bite of a bullet ant. Her edgy tone hints at the pain. As the author visits both remote and urban locations, he gives coordinates so that listeners themselves can find the trees he describes if they're in the vicinity. J.A.S. © AudioFile 2017, Portland, Maine [Published: APRIL 2017]