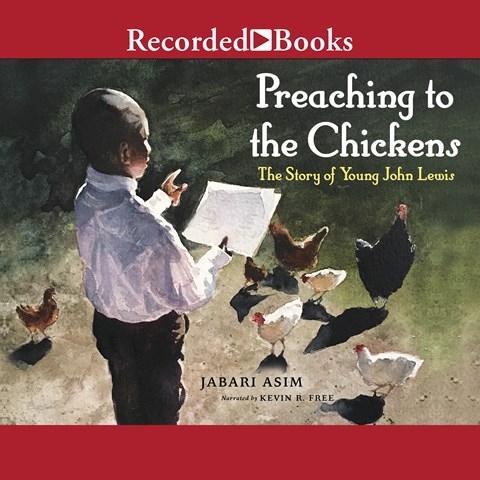 PREACHING TO THE CHICKENS The Story of Young John Lewis

In this children's audiobook, narrator Kevin R. Free captures the essence of Congressman and civil rights leader John Lewis's childhood on a farm in southern Alabama. Listeners will hear the story of a young Lewis, one of the original Freedom Riders, as he preaches to his charges, the chickens, as part of his daily ritual of feeding and watering them. Free's performance is quite lyrical as he breaks out singing "Amazing Grace." He also evokes empathy from listeners as Lewis hopes that God will forgive his overly enthusiastic baptizing of his chicken named Li'l Pullet. This story is meant to be enjoyed with the accompanying picture book but can also be heard on its own. E.E.S. © AudioFile 2017, Portland, Maine [Published: APRIL 2017]