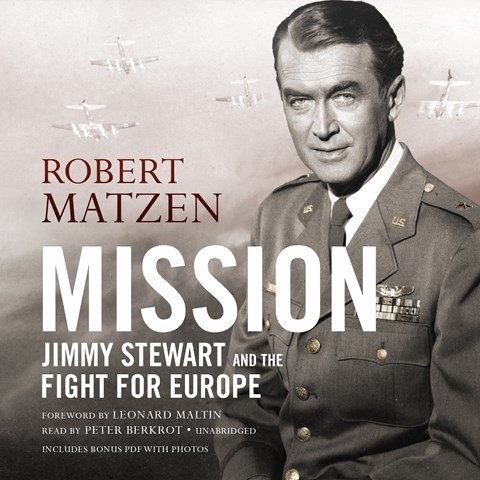 MISSION Jimmy Stewart and the Fight for Europe

Meticulously researched, articulately written, and beautifully narrated, Robert Matzen's work takes a fascinating look at film star Jimmy Stewart's life, with a focus on the performer's participation in the air battles of WWII. Narrator Peter Berkrot has a tall order in the massively detailed text, but he exceeds expectations. Berkrot's performance is replete with occasional understated and accurate vocal characterizations, making his authoritative reading honest and absorbing. Stewart, who always loved planes and flying, was unwavering in his dedication to fighting for his country--and winning. After becoming a pilot in the Army Air Corps, he rose from private to colonel and then at the end of the fighting successfully rebuilt his film career with director Frank Capra and the iconic film IT'S A WONDERFUL LIFE. W.A.G. © AudioFile 2017, Portland, Maine [Published: JUNE 2017]