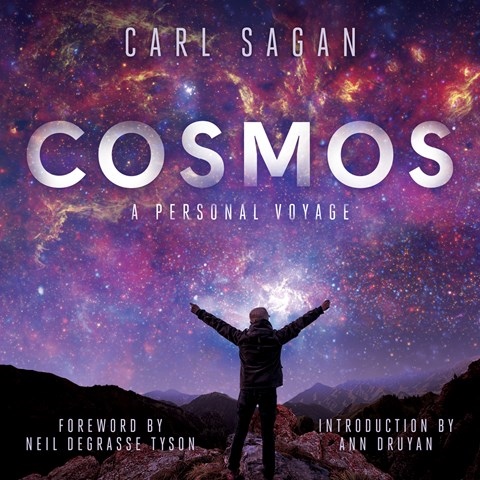 Carl Sagan's classic (1980) examination of the cosmos, released for the first time as an audiobook, combines accessible writing, poetic imagery, and awe-inspiring imaginings grounded in science. Narrator LeVar Burton's intuitive pacing and tone guide listeners through discussions of landmark scientific discoveries, human culture and history, life on Earth, and our connections with the universe. Those familiar with Burton's roles in "Star Trek: The Next Generation" and "Reading Rainbow" will delight in his companionable narration. He employs slight accents when voicing notable scientists like Sir Isaac Newton and Johannes Kepler. Additional narrators, Seth MacFarlane, Ann Druyan, and Neil Degrasse Tyson, round out this stellar production with warm and inviting readings of the introduction, foreword, and an essay, respectively. J.R.T. © AudioFile 2017, Portland, Maine [Published: AUGUST 2017]