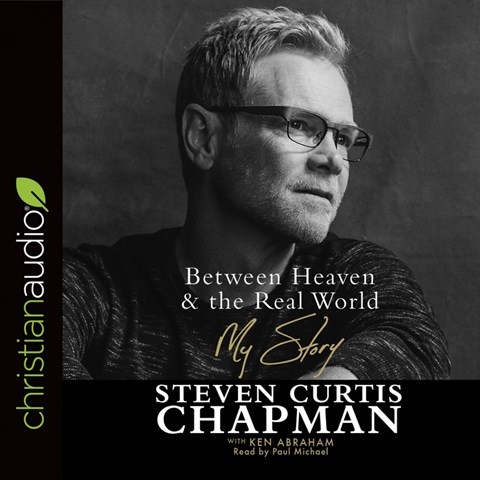 BETWEEN HEAVEN & THE REAL WORLD My Story

Christian music star Steven Curtis Chapman's life story starts out with an ordinary childhood in Paducah, Kentucky. But even at the beginning, narrator Paul Michael's tone suggests awe at the musical career that Chapman developed as an adult. Michael excels at capturing Chapman's humility and wry humor. Listeners will smile as he recounts Chapman's struggles with a pre-med program in college before he switched to music, as well as the ups and down of his courtship of his wife, Mary Beth. Michael's gentle tone and Chapman's self-deprecating humor make the early problems in Chapman's marriage relatable and human. As the story continues, Michael gradually shifts toward a more serious tone, foreshadowing a tragedy in Chapman's family. Listeners will learn about Chapman's commitment to adoption, his Christian faith, and the thoughts that go into some of his popular songs. J.A.S. © AudioFile 2017, Portland, Maine [Published: MAY 2017]