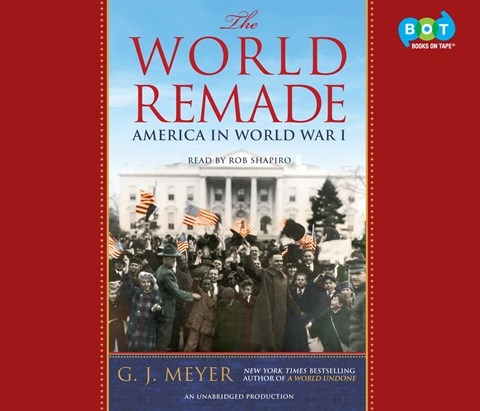 THE WORLD REMADE America in World War I

G.J. Meyer's fascinating and controversial history of U.S. involvement in WWI is ably served by Rob Shapiro's fully engaged narration. Meyer, the author of many books, including a well-received 2006 examination of the war's effects on Europe, is a journalist rather than an historian. He has a great feel for plot and character study as well as a thought-provoking point of view on the fear and ego that led so many nations into tragedy. The book's qualities are highlighted by Shapiro's pleasant and forthright American voice, devoid of regional accent, and by his varied and attentive pacing. Together they help drive a story that remains hard to conceive. The one lasting fact is the heartbreaking bravery of the troops who fought on despite the foibles of the men who led them. A.C.S. Winner of AudioFile Earphones Award © AudioFile 2017, Portland, Maine [Published: SEPTEMBER 2017]