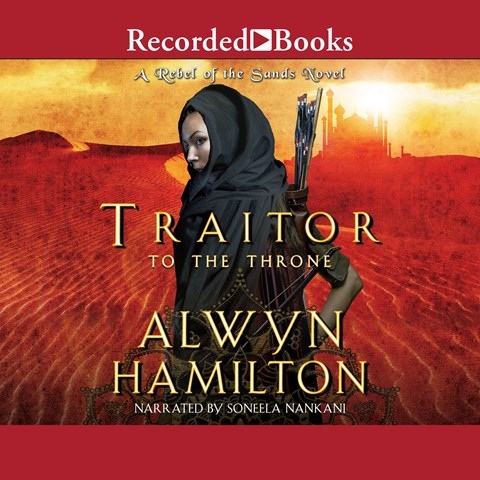 TRAITOR TO THE THRONE Rebel of the Sands, Book 2

Soneela Nankani, who narrated the first in this series, continues Amani's first-person story. Bold, snarky Amani lives in a land that melds the Old West and the world of the Arabian nights. Amani is even more central to this plot, and Nankani deepens her personality accordingly. At the story's opening, Amani is imprisoned, and Nankani stresses equally her sarcasm and compassion. Soon Nankani reveals courage and wit as Amani escapes and joins rebels who oppose the sultan. Amani's resilience and resourcefulness shine when she's captured by the sultan. Nankani's perfect pacing balances plot details and twists, the many characters, and Amani's shifting sentiments. This second audiobook will be best appreciated by listeners who have heard the first. The ending of the second will excite fans about the final book in this trilogy. S.W. Winner of AudioFile Earphones Award © AudioFile 2017, Portland, Maine [Published: APRIL 2017]