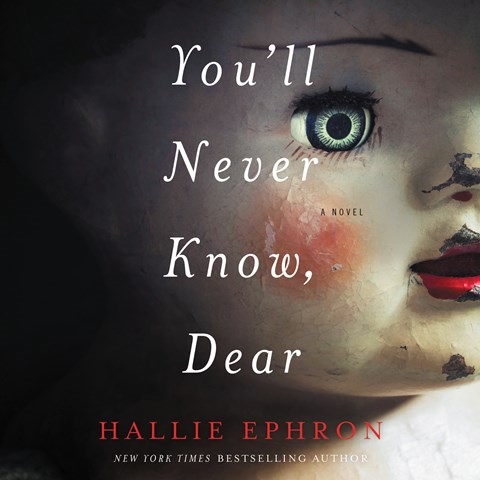 Hallie Ephron has achieved a riveting suspense novel, and Amy McFadden's narration is compelling. Forty years ago, Lis and Janey were playing outside when Lis ran after a puppy, leaving 4-year-old Janey alone. When she returned, Janey, and her one-of-a-kind porcelain doll, were gone. On the anniversary of Janey's disappearance, their mother places a photo of Janey's doll in the newspaper, offering a substantial reward for clues to Janey's whereabouts. When the doll is returned, McFadden ramps up the tension with completely credible characters, including Janey's mother; Miss Sorel, a doll maker; daughter Lis, who blames herself for Janey's disappearance; Lis's daughter, Vanessa; her next-door neighbor, Evelyn; and the slightly sketchy woman who's after the reward. McFadden handles plot twists and coincidences with understated intensity, making this a must-listen. S.J.H. Winner of AudioFile Earphones Award © AudioFile 2017, Portland, Maine [Published: JUNE 2017]