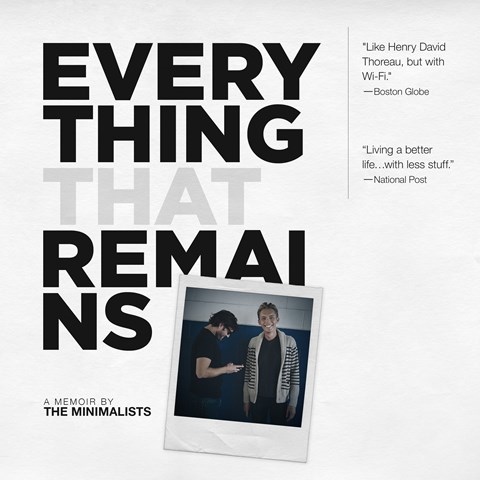 EVERYTHING THAT REMAINS A Memoir By the Minimalists

In a culture that embraces rampant consumerism, the authors, who call themselves the Minimalists, are on a quest to convince others that less is truly more. Following the death of his mother and the dissolution of his marriage, Millburn convinces his childhood friend Nicodemus to embark on a journey to pare down their lavish lifestyles in exchange for a more meaningful existence. Narrator Justin Malik's laid-back tone brings forth the affable familiarity between the two while providing emotional depth where necessary. Humorous asides by Nicodemus peppered throughout are indicated by a deeper timbre from Malik, vibrantly capturing the collaborative nature of the story. Malik's straightforward vocal approach to this testament to intentional living fits the writing like a glove. E.E. Winner of AudioFile Earphones Award © AudioFile 2017, Portland, Maine [Published: JUNE 2017]