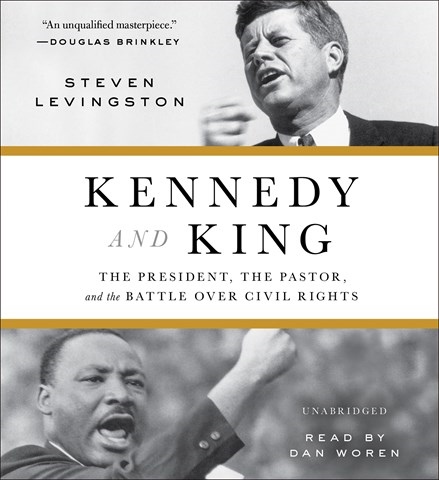 KENNEDY AND KING The President, the Pastor, and the Battle Over Civil Rights

President John F. Kennedy and Reverend Martin Luther King, Jr., this audiobook reminds us, shared the national stage at a crucial moment in American history. By the time Kennedy died, they had set in motion events that would result in landmark legislation and a shift in how America views race relations and equality. Narrator Dan Woren approaches this audiobook with a seriousness of purpose and a manner that focuses on the facts and text, rather than on vocal agility. His deep voice and methodical pacing allow the listener to follow the story, and his light characterizations remind us who is talking. His voice also rises and falls with the action and reflects some of the emotions of the day. In the end, Woren's is a solid performance. R.I.G. © AudioFile 2017, Portland, Maine [Published: JULY 2017]